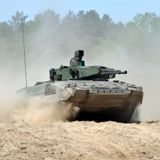 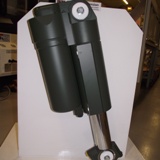 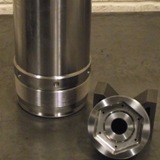 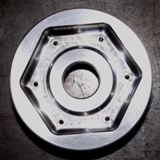 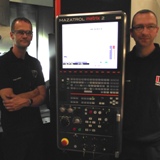 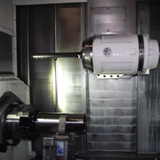 A partnership between Mazak, EDGECAM and Iscar has created a £1.25m manufacturing cell giving a leading defence systems manufacturer additional capacity to produce complex 5-axis components on a sub-contract basis.
Horstman Defence Systems Limited are renowned for designing and developing high-performance suspension systems for military vehicles. Their customer base includes more than 35 armed forces around the world, each taking a number of different products.

“It saves so much time because I don’t have to reproduce my own geometry. The standard roughing and finishing cycles, particularly in turning, are extremely quick and easy to use.”

The new manufacturing cell was established to produce components for a NATO Infantry Fighting Vehicle. It comprises two Mazak Integrex i-400 machines and one i-200s all programmed by EDGECAM, along with a tool vending and management system managing a total of 111 Iscar cutting tools in around 88 different tool assemblies, and an array of inspection equipment. The contract is for 4,200 suspension assemblies over the next seven years.  Horstman are manufacturing nine components in the cell for each assembly.
Nigel Hammett, Horstman’s Manufacturing Engineer for Process Development, says: “The cell has reduced our machining time by up to 70 per cent in some cases, and by an average of 40 per cent, compared to more conventional machine tools and programming methods. We’re currently producing an average of 360 parts for 40 units each month, but we have capacity to manufacture 60, even 90 with a further shift at maximum run rate.”
Amy Barker, Horstman’s Commercial Manager, says that part of the cell’s success is down to using Statistical Process Control (SPC). The cell controls a total of 28 separate processes – all of which have critical dimensions which are tightly monitored, resulting in a zero scrap rate since beginning full rate production in April 2013.
Parts for the suspension assembly vary in size from around 50-450mm and Nigel Hammett says the fact that the first components came off the production line within days of the cell being established is testament to the work EDGECAM, Mazak, Horstman and Iscar did in the four month machine tool lead time. After initially working closely with Iscar to define the processes and tooling, Nigel spent the two months immediately prior to installation using EDGECAM implementing those processes. “This meant the programs and tooling were available for development as soon as the machines were installed.”
One of Nigel’s first tasks when joining Horstman four years ago was to review the company’s CAM systems. “Before then, machines were programmed online on the shopfloor, or by taking 2D geometry and writing programs manually. But with our design engineers starting to use solid modelling packages the geometry became increasingly more complex and we embraced EDGECAM because it is powerful state-of-the-art CAM which complements the design software. When we needed CAM for the new production cell, it was always going to be EDGECAM.”
Nigel takes SolidWorks models from the design team, interrogating each feature for size, relevant to the drawing limits, and where necessary adjusts the component size to his target manufacturing tolerances. “I then import that solid model into EDGECAM along with a solid model of the material, which may be anything from a simple cylindrical billet, to a stage machined model. I assemble those two components together, then create toolpaths using EDGECAM’s standard functionality.”
He says EDGECAM’s ability to use solid models from design is absolutely vital. “It saves so much time because I don’t have to reproduce my own geometry. The standard roughing and finishing cycles, particularly in turning, are extremely quick and easy to use. And the ability to simulate the toolpath is crucial so we know before we start cutting metal that there’s not going to be a collision and that we’re producing the right geometry.”
While Horstman has the capacity for 5-axis machining for sub-contracting, the work in the new cell is all 3+2, with exacting tolerances, all easily achievable with EDGECAM driving the high end machine package. “The system is capable of holding a 10 - 15 micron range for diameters, with surface finishes between 0.4 and 3.2 microns.” The machine tools are equipped with Mazak’s high productivity package with coolant temperature control, ball screw core cooling, scale feedback options, plus a factory automation option. In addition, they are housed in a fully air conditioned environment. “We also use Renishaw Inspection Plus software enabling us to gauge the component while it’s still on the machine – all these things mean that the cell produces extremely high accuracy work.”
Cell leader Paul Sutton says mill-turning with EDGECAM has changed his job role considerably. “As a traditional miller it’s been a big eye opener for me now we’ve got the ability to produce components better and faster than before. This is definitely the way forward for the type of components we make, which are mainly turned with some milling required.”
The introduction of the cell now means that Horstman have freed up capacity on these and other machines in the factory to utilise for another aspect of their business – low-to-medium volume sub-contract complex precision machining. Amy says, “In particular, our three Mazak Integrex mill-turn centres programmed with EDGECAM take complex components in their stride, giving us additional capacity for full 5-axis machining.” In order to meet the demands of their customers, Horstman also manage all aspects of production, from heat-treatment to coatings, to testing, assembly and paint.
Having celebrated its 100th anniversary in 2013, Horstman operates out of 50,000 square foot premises in Bath with more than 90 employees.
EDGECAM’s Strategic Partnership Manager, Wesley Tonks says working with Mazak and Iscar is a perfect example of how an end-user – in this case, Horstman – utilises the technical expertise of three core disciplines, CAM, machine tools and cutting tools, to create a productive manufacturing cell. “The requirement of any manufacturing operation to produce consistent, quality components, within a cost-effective process, will enable them to be competitive in a global market.”

“It saves so much time because I don’t have to reproduce my own geometry. The standard roughing and finishing cycles, particularly in turning, are extremely quick and easy to use.”
Nigel Hammett, Manufacturing Engineer for Process Development